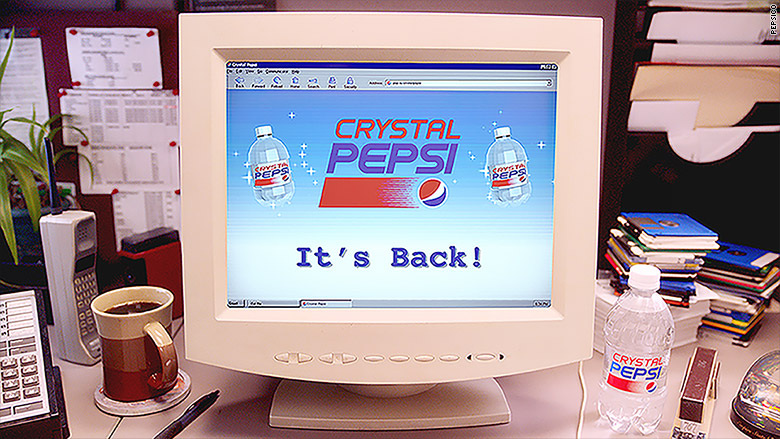 I’m not ashamed to say that I’ve always missed Crystal Pepsi. It’s one of those peculiar 90s relics that left us way too soon — relegated to the ash heap of history along with Pog, Tamagotchi and 56K modems. (Come on, who didn’t love the dial-up noise?)

I’ll admit that the essence of Crystal Pepsi was suspect from the start: clear soda that tasted like regular cola. But sometimes we don’t ask for greatness. Sometimes greatness finds us.

So PepsiCo launched its one-of-a-kind product (that no one asked for) in 1992 with a comprehensive $40 million campaign. There was a Super Bowl TV spot backed by Van Halen. There were free two-liter bottles delivered with the Sunday paper in Boston. In just one year, Crystal Pepsi cleared nearly $500 million in sales.

Then it was gone forever. Until now.

This week, PepsiCo announced the (heralded?) return of Crystal Pepsi to store shelves everywhere beginning next summer — after a limited-time, sweepstakes-style promotional giveaway. Following on the heels of Coca-Cola’s recent revival of Surge, PepsiCo credits a grassroots effort for finally bringing Crystal Pepsi back from product purgatory.

According to AdWeek, the relaunch will be ripe with nostalgia and fully integrated into PepsiCo’s larger brand loyalty program called Pepsi Pass, as well as social media channels like Instagram.

So this just one big joke, right? Or perhaps a shameless ploy to cash in on the sudden cachet of all things 90s?

It could be both — but I think there’s more to the story. The Pepsi brand’s bread and butter has always been the cool factor, from Michael Jackson and “The Choice of a New Generation” to the recent Pepsi Perfect tie-in with “Back to the Future Day” in October.

With 90s fever picking up steam in today’s popular culture, PepsiCo’s relaunch of Crystal Pepsi is a well-timed, ownable (and yes, fun) way to claim their piece of throwback history while keeping today’s customers engaged with their brand.

And in case you’re wondering, Crystal Pepsi pairs nicely with pepperoni pizza — or so my 1992 self says.

With more than a decade of agency experience, John leads the writing effort at VantagePoint for the company’s full roster of clients. As senior copywriter and content developer, he’s also involved in the concepting process, working with the creative team to bring new ideas to life. A proud Virginia native and Furman University graduate, John originally hails from Richmond, where he developed a love for writing early on — as well as a pseudo-obsession with NASCAR.
Posted in Advertising, Branding
Tags: Advertising, Branding, Product marketing