At VantagePoint, we look forward to the NRA Show in Chicago every year — not only for the food samples (although that’s part of it), but also filling up on what our clients, their competitors and other heavyweights in the industry are up to. This year there were 14 VantagePoint team members walking the floor, so perhaps you saw one of us taking in a demo, perusing your booth or sitting in on an educational session.

One of the most beneficial parts of having so many of us at the show was the discussion that happened after. From best practices to unfortunate misses and new ideas, we were not short on NRA Show 2015 observations. So while it’s tempting either to take time to catch our breath or to dive into the projects that were set aside until after the busy tradeshow season, let’s first take a moment to look back at what we’ve learned.

Here are a few of our top takeaways from this year’s show:

1. Newness matters. For those of us who have been to NAFEM and NRA for a few years, we caught ourselves walking right past booths that appeared to be the same as in previous shows, subconsciously making the assumption that there wasn’t anything new to discover. That made us wonder: how many operators and other decision-makers did the same and potentially missed out on new offerings? Try this: While there’s nothing wrong with designing a booth that will last you several years, consider adding a “What’s New” station in a visible place or switching out a few key graphics to help tell passers by that you’re worth the stop.

2. What are you selling, anyway? When attendees walk by your booth, can they immediately tell what you have to offer based on your messaging, graphics and products on display? We had a few new people at the show with us this year, and it was interesting to hear questions like “What do they do?” when walking by a booth. Try this: Take a hard look at your booth and consider the perspective of attendees. Are your products (or pictures of your products) highly visible? Is your messaging clear and focused about what you offer or why you’re different? Don’t make assumptions about how aware prospects are of your brand.

3. It’s all fun and games until… There were several booths with fun contests, games and photo booths to draw people in and capture leads. And with two days to spend walking the floor, a few of us participated in every one of them we saw. In one booth, we played a game and left without understanding what exactly they were selling. In another, we asked if we could use the photo booth, and no one tried to talk to us or help us. Seems like a missed opportunity, right? Try this: If you’re going to invest in a contest, game or photo booth, make sure it’s properly branded and messaged, and make sure someone is tasked with making the connection with prospects. Sure, some people might just play the game for fun, but you don’t want to risk prospects walking away because it’s too hard to connect with someone.

4. Creativity counts. Many attendees can only be at the show for a day or two, limiting the number of booths they visit and conversations they have. Perhaps your product or service isn’t on their short list of must-see booths, but there’s still a chance to attract them as they pass by. Two booths that impressed us were Tabasco and Steelite International, a glassware and dinnerware supplier. Tabasco pulled people in with Tabasco ice cream (who isn’t curious about that?), and Steelite hosted a mixologist demonstrating drink ideas using Steelite products. Both examples go beyond the expected taste tests and product displays to invite prospects into the booth. 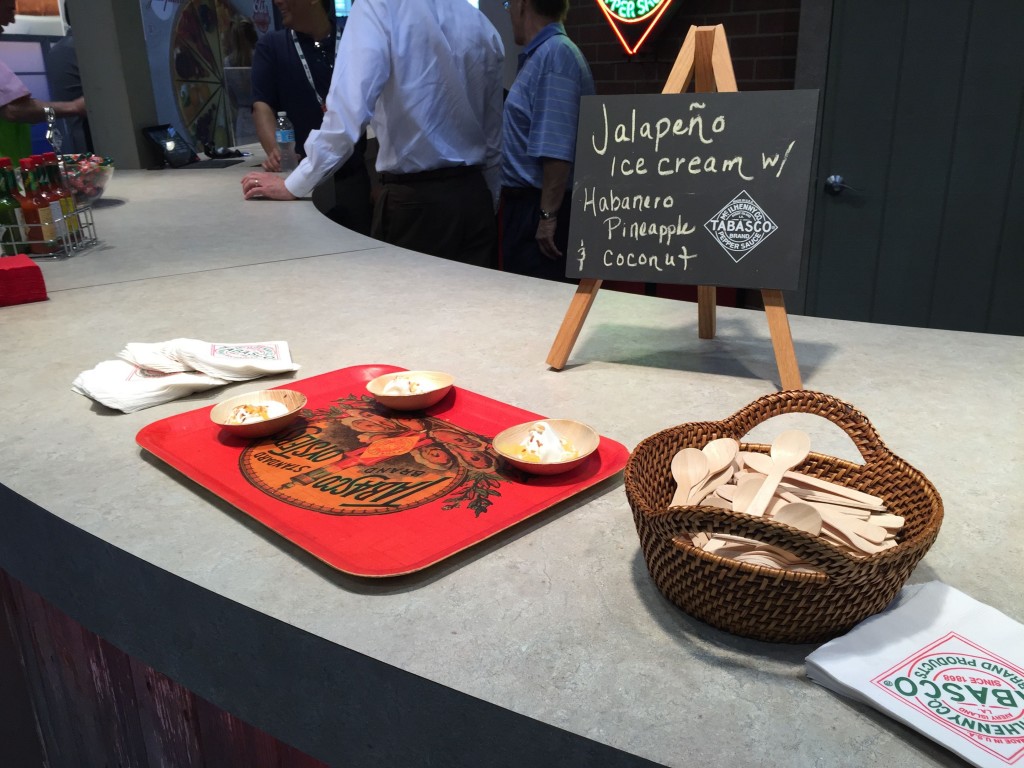 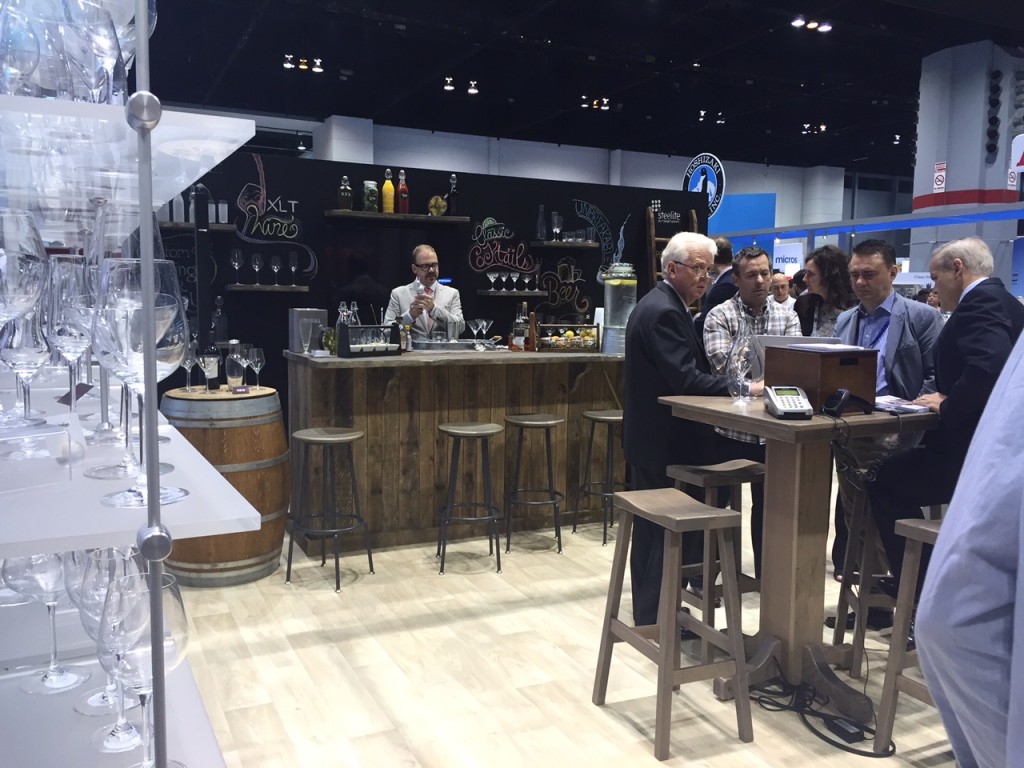 Try this: Start by thinking what’s of value to your target audience — such as expert advice or creative menu ideas — and then about how you might help fulfill that experience, using your people, your products and your booth space. Demonstrating your creativity and expertise will go further than just another food handout.

5. Own what you’re good at. Yes, sustainability is a trend. Yes, healthier menus are becoming increasingly important. Yes, operators are looking to cut costs. But that doesn’t mean that your company needs to check all of those boxes in the eyes of buyers. Trying to be too many things to too many people dilutes your message — and your trade show presence — making it easy to pass you by out of confusion. My favorite messaging from the entire show was in this small inline booth by Chocolate Shoppe Ice Cream. They didn’t spend time trying to promote a low-cal option or tell how their cows are fed. They simply offer delicious and fattening ice cream, and people love it. Works for me. 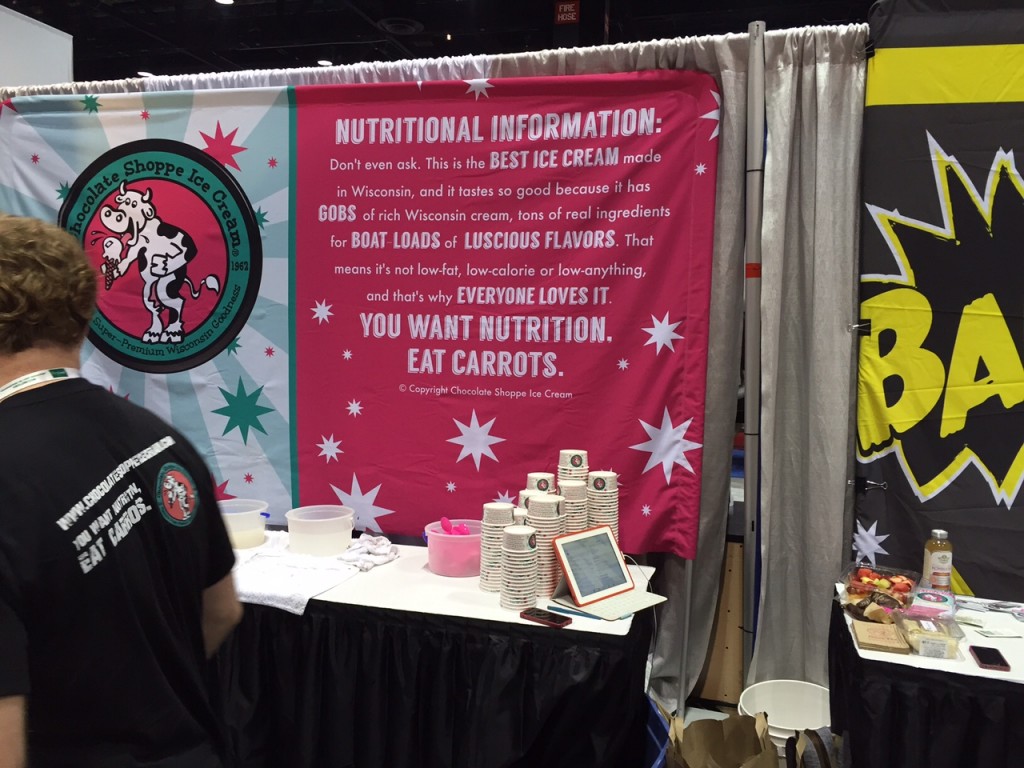 Try this: Decide what it is that you do or offer that’s truthful and important, and lead with it. Or, if you have varied product lines with different messages, find a way to connect the dots for prospects. There will always be secondary messages you need to share, and that’s fine. Just make sure you have the audience first.

These are just a few of the observations and ideas from the NRA Show being discussed at VantagePoint, but I think the most important thing to remember is that making changes to your booth presence takes time and effort. So as we all get back to post-tradeshow-season catch-up, let’s mark time on the calendar to start planning for the next show before it’s too late! 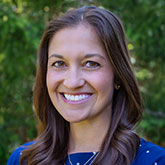 Angie, director of client services at VantagePoint, is a graduate of Ohio University’s E.W. Scripps School of Journalism. She’s brought award-winning management to a variety of consumer and B2B clients for more than a decade, leveraging her experience in initiatives like lead generation and trade show strategy for several clients. Outside the office, Angie enjoys spending time with her husband Mykal, her two daughters, Ellis and Evie, and her dog Mac.
Posted in Advertising, Branding, Marketing
Tags: booth, National Restaurant Association, NRA, trade show, tradeshow